Amid nationwide campaign in fighting the deadly virus, questions linger as to whether the Chinese government is capable of fighting the coronavirus battle, whether the shortage of medical supplies in Central China’s Hubei Province – center of this battle – could be solved, does the country face significant inadequate medical services and how to support Wuhan residents who are mentally burned in such a huge crisis.

As new coronavirus cases continued to surge on Sunday, for residents at the quarantined epicenter of the spreading contagion, the focuses are lack of medical supplies, flaws in local governance and fears of a worsening situation.

While in the last week, the whole country has been mobilized to implement stricter preventative measures and conduct various anti-virus measures in the hopes of containing its spread, the city of Wuhan remains at the frontline.

For many residents living largely indoors since the city lockdown on January 23, the first thing they do in the morning is check their Chinese social media to see how many confirmed cases, dig out useful information and send supportive messages to friends and family members.

The death toll in China on Sunday morning hit 304 with more than 14,000 confirmed cases.

Digesting good and bad news, not to mention massive rumors, has been testing the psychological limits of people in Wuhan and the whole Hubei Province, especially those separated from infected family members who are receiving treatment under tight conditions. Hubei provincial Red Cross, which is under national spotlight for slow emergency response, provoked public outrage.

In Wuhan, the frontline of the battle, shortages of medical equipment and facilities remain the top problem: too many suspect patients demanding they receive one of too few available hospital beds, according to medical staff interviewed by the Global Times. They insisted on anonymity.

“The callers inundate our hotline every day asking for beds, but we do not have, what can we do?” one interviewee told the Global Times on Sunday.

Zeng Guang, chief epidemiologist of the China Center for Disease Control and Prevention, told the Global Times the current medical material shortage was due to a surge of patients most of whom were infected at the early stage of the epidemic.

The central government emphasized Sunday that its top priority was to guarantee medical supplies and equipment for Hubei, especially Wuhan.

Beijing has already committed concentrated manpower and material resources to the battle in Wuhan.

In addition to a lack of hospital beds for growing numbers of infected patients, the city is suffering from a shortage of medical supplies and a lack of coronavirus test kits.

Meanwhile after weeks of nonstop work, frontline doctors and nurses have been suffering burnout. Some have been emotionally overburdened at seeing coworkers also infected with the deadly disease.

The good news is that increase cases are more from previous patients being confirmed than newly infected cases, Yang Zhanqiu, deputy director of the pathogen biology department at Wuhan University, told the Global Times on Sunday.

The death rate in these areas is also likely to rise, he warned.

“The most urgent mission is to allocate medical supplies and deploy personnel to places outside Wuhan as an outbreak in those places would be more likely to drive things out of control than that in the capital city of Hubei,” Yang said. 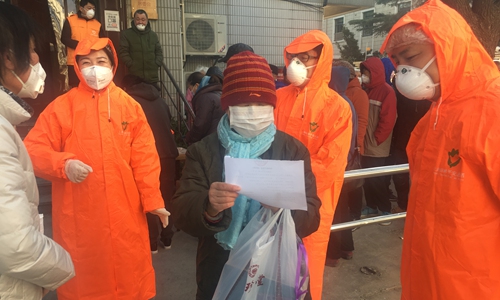 Residents of a Xuhui district complex in Shanghai buy masks on Sunday after registering their identity. Each resident is limited to five masks following the coronavirus outbreak in Central China’s Wuhan. Photo: Feng Yu/GT

Doctors at hospitals designated for treating coronavirus patients show palpable anxiety and frustration as they struggled to handle the crowds.

“Frontline medical employees can’t back off as this is their duty,” Cheng Cai, a doctor at Tongji hospital, told the Global Times on Saturday night.

When colleagues were infected, medical staff were also “very nervous,” Cheng said. “But still many volunteered to fight at the frontline,” he said. “Some gave up holidays and some worked without taking a break.

The central government, local authorities and the military have all mobilized resources in support of the epicenter of the coronavirus.

Construction of Huoshenshan Hospital – the first hospital in Wuhan specially for patients infected with the novel coronavirus – was completed Sunday and delivered to 1,400 military medical staffs.

Meanwhile, 1,200 doctors and nurses from critical care unit of 10 provinces and cities arrived at Wuhan on Sunday to support the fight, according to the National Health Commission in Beijing.Chinese analysts underlined that the government should let companies and professional people aid these efforts when necessary, such as transporting medical supplies and tending to the daily needs of quarantined residents.

For example, a Hubei-based company was designated to sort out supplies and donations, allocate and transport them to hospitals in response to failings by the Red Cross Society in its record-keeping and delivery to the frontline.

Professionalism demands health care workers not vent their negative emotions now. Stress and trauma may not be expressed until after the epidemic, when a higher level of psychological assistance is required, they noted.

“Anxiety is the primary emotional response of the public who call for help, and it’s a common response of social groups in the face of major disasters and epidemics, which can be contagious and amplified in the current internet age,” Du Mingjun, executive secretary of Hubei Psychological Counselors Association, told the Global Times on Sunday.

A 30-something Shanghai worker, who did not go back to hometown Wuhan during the Spring Festival holidays, told the Global Times reporter that her grandmother died amid the pneumonia outbreak.

“Life needs to move on,” the woman, who requested anonymity, told the Global Times on Sunday. “This crisis can serve as a warning shot, forcing local authorities to improve governance and better respond to an emergency.

“Hopefully, other people will not need to suffer when things get better.”

Self Drive Car Jackie - August 3, 2020
0
Proximity sensors are devices that many people come across every day without even realizing it. With a variety of applications, proximity sensors...

Certified Pros of Polarized Sunglasses You Must Know

How To Improve The Performance Of Your Business

Business techbizweb - July 23, 2020
0
Are you looking to improve the performance of your business? Whether you feel that your company is not performing to a high...

Certified Pros of Polarized Sunglasses You Must Know

How To Improve The Performance Of Your Business