Social media accounts of NFL teams, including the Chiefs and Packers, are hacked by cyber group ‘OurMine’ that warns ‘everything is hackable’

The NFL and several of its teams had their Twitter accounts hacked on Monday by a group calling itself ‘OurMine.’

‘Hi, we’re Back (OurMine),’ read several since-deleted tweets that appeared on the Buffalo Bills, Chicago Bears, Houston Texans, and Kansas City Chiefs’ Twitter accounts. ‘We are here to Show people that everything is hackable.’

The hackers then offer to help their victims ‘improve’ the security of their respective Twitter accounts, according to USA Today. 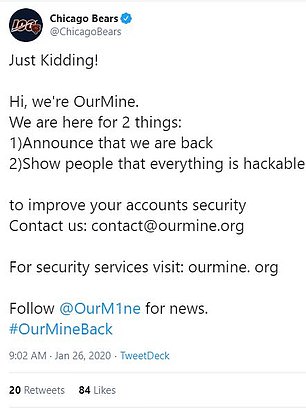 OurMine hacked the Chicago Bears’ account (left) on Sunday, announcing that the team had been sold to Saudi Arabian royal family adviser Turki Al-Sheikh. Other accounts were also hacked (right)

The Instagram page for the Minnesota Vikings was also hacked, according to multiple reports.

The NFL released a statement on Tuesday.

‘On Monday, the NFL Cybersecurity department became aware of a breach of a league-related social media account,’ the statement began. ‘Targeted breaches and additional failed attempts were discovered across the league and team accounts.

‘The NFL took immediate action and directed the teams to secure their social media accounts and prevent further unauthorized access. Simultaneously, the league alerted the social media platform providers and, with their assistance, secured all league and club accounts. We continue to work diligently with the teams, which have resumed normal operations.

‘The NFL and teams are cooperating with its social media platform providers and law enforcement.’

According to NBC Chicago, the same group hacked the Chicago Bears’ account on Sunday, announcing that the team had been sold to Saudi Arabian royal family adviser Turki Al-Sheikh.

That since-deleted tweet was followed by another plug for the group.

‘Just kidding,’ the response from OurMine began. ‘Hi we’re OurMine. We are here for 2 things: 1) Announce that we are back. 2) Show people that everything is hackable.

‘To improve your accounts (sic) security contact us: contact@ourmine.org.

‘As soon as we were made aware of the issue, we locked the compromised accounts and we are currently investigating the situation,’ Jen Santamaria said. 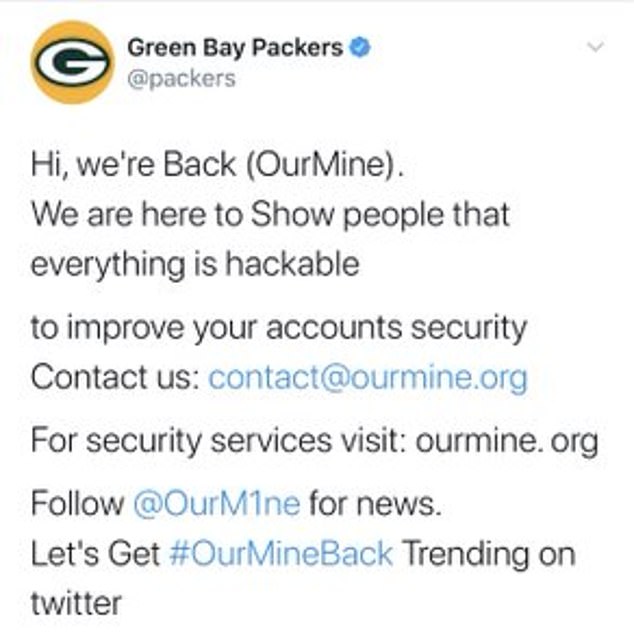 Cyber Security Patrick Pressman - March 28, 2020
0
“It takes 20 years to build a reputation and a few minutes of cyber-incident...

Business techbizweb - March 18, 2020
0
In Napag we provide value-added service to our beloved customers by sourcing, supplying as well as marketing petrochemical products in markets where we have...

Business Elsa Nilsson - February 26, 2020
0
Christian Eidem, Chair of Life Materials, welcomed the recent report by the Swedish Water Board: “There is a growing demand for natural fabrics and that demand will continue to grow. But not all natural fabrics are the same.” Anders Finsson, the Senior Environmental Advisor of the Swedish Water & Wastewater Association (Svenskt Vatten), presented their findings at the recent Biocides conference in Vienna. The key finding in the report is that many so called green fabrics use metal, especially silver, to allow them to have less odour and therefore require fewer washes.