Posted in Europe, GNU/Linux, Microsoft at 1:56 am by Dr. Roy Schestowitz

He should know. He saw that.

Summary: Christian Ude (above) speaks in a new interview about what Microsoft did in Munich and elsewhere in Europe in order to undermine GNU/Linux and impose Microsoft Windows on everybody, together with all the spyware Microsoft provides for it (likely violation of privacy laws)

THE ENGLISH-speaking media has said nothing about this (not even meta news sites like Slashdot), but the German sphere discussed “Münchens Ex-OB Christian Ude im Interview“ (the title is likely self-explaining, at least the name).

“We assume our readers are wise enough to understand that Microsoft is the same old corrupt company, with new lies and PR.”One person from Germany wrote to tell us the gist of it. It’s important for Techrights, having covered the Microsoft affairs there for almost a decade (and EPO affairs in Munich even more closely for half a decade). It is widely known — to all who are sober at least (not sucking in the corporate media’s revisionism) — that Microsoft attacks all GNU/Linux deployments across governments in Europe as means of defunding (stopping public money or cash flow to) projects such as LibreOffice. We produced evidence of this — sometimes in the form of documents from inside Microsoft, obtained by leaks and subpoenas.

We assume our readers are wise enough to understand that Microsoft is the same old corrupt company, with new lies and PR. The work with the Pentagon and ICE should be eye-opening reminders of it. Opposing Microsoft is “fighting yesterday’s fight” say people who often turn out to be receiving Microsoft money (sometimes through affiliates). Microsoft is attacking GNU/Linux on several fronts still. Microsoft is very unique in that regard. In internal documents Microsoft calls GNU/Linux use/users “infestations” as if we’re cockroaches; that’s how they view us. Regarding what happens in Munich, one person has just told me: “even in early 2000s Microsoft were that deeply embedded in Munich that they got free advertising on the public service broadcaster BR as part of the “Laptop und Lederhosen” culture Bayern was trying to promote since the late 1990s…”

BR threatened us once; legal letter for hosting translation of a show.

The above person explained: “Last night at some strange hour I decided to watch youtubes of the closedown sequence of Bayerischer Rundfunk from (I think) the early 2000s.

“They play the Bayernhymne, das Deutsches Lied and “Ode an die Freude” (EU-anthem)

“During the Bayernhymne they show a young man in a suit using a PDA. This is whats on the screen.

“Given what happened with Limux, its interesting to see this turn up there (although maybe not against the rules as German public TV can have advertising?)”

What on Earth…? We’re reproducing it here: 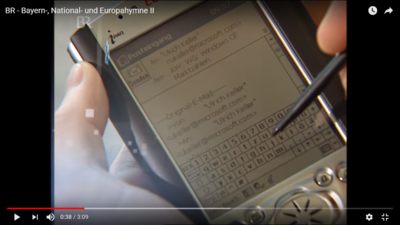 Sometimes it seems like Microsoft is all about marketing and dirty tricks, yet it is disguised as a “software company”; it has been the case for decades and nothing has changed.

What does the former mayor of Munich have to say? We’ll try to stick to the facts.

So I responded: “Can you send the gist of it/best part?”

“I’ll try,” he said. “Despite Microsoft’s various attempts of persuasiveness, including personal talks with Ballmer and Gates, Ude stuck to the idea of less dependence using FOSS. After Munich administration [was] left with the choice of forced upgrade (= $$$) or no further support from Microsoft Ude mentions having watched a documentary in the last year of similar Microsoft lobbying attempts allegedly regarding the city of Vienna and the defense ministry of Italy, to curb any development of an alternative, to keep Europe dependent.

“Ude cites a “Bayernspiegel” article about Wilhelm Hoegner (deceased) with the words “Main focus of attention used to be US software calling home. Unluckily nowadays noncompliant minds like him have disappeared from politics and administration. […]”

“The decision to convert (14.000 PC clients) back to Microsoft from Limux [some time] until 2020 was a purely political one. Christian Ude: “There wasn’t a single unsolvable technical problem.”

“Ude states his belief that the political calculus of changing direction [away from FOSS] probably will not bear fruit and closes:

“Sooner or later one will ask again:

“Why did the independence once fought for got given up?

“Why wasn’t the potential of higher data security held in higher regards?

“What’s the cost of all of this?

“Not a word-by-word translation of that four page interview. Yet I hope not to have put anything wrong into anybody’s mouth.”

There’s also this additional quote: “[…] what followed is a youth mindlessly prostituting itself on the Internet, passively accepting to get their data robbed from by tax evading megacorps whilst the fate of a rising share of younger people boils down close to poverty.”

Longtime readers of ours saw us covering many angles of this since around 2007. The subject has not been explored by the media for at least half a year, which makes one wonder; is media in general dying or is media discouraged from revisiting this matter? █

Send this to a friend